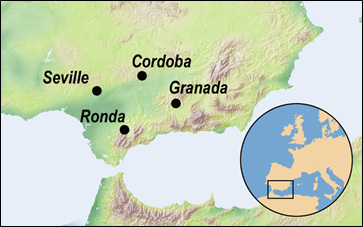 Almost no part of the art and culture of southern Spain has been untouched by its Islamic legacy. When a mixed force of Arabs, Syrians, Berbers and Egyptians began an advance into southern Spain in the 8th century, they began a cultural legacy which lasted until the 15th century.  These peoples became collectively known as ‘the Moors,’ a name that derives from the words mauros and maurus used by the Greeks and Romans to describe the inhabitants of Mauritania.

Though the region was gradually re-conquered by the Christians from the 12th century onwards, the skills and artistry of the Moors were absorbed into the Christian culture of Spain. This in turn gave the region a legacy of magnificent Renaissance buildings and Baroque churches. Yet everywhere one travels in Andalucía, the evocative magic of the Islamic influence grips and captivates. And it is not just in the beautiful monuments that this influence can be traced: even the simple call of ‘Olé, Olé’ is but a derivation of ‘Allah, Allah’!

The journey begins in Seville whose Golden Age began in 1492 with the discovery of the Americas when lavish palaces and exquisite gardens were created. Visit the Alcázar, one of Spain’s most glorious buildings, designed by Moorish architects for Seville’s Christian rulers. En route to Cordoba, stop at Madinat al-Zahra, a palatial town built in the 10th century for the caliphs of Cordoba. Under Moorish rule, Cordoba was Europe’s largest and most splendid city. Visit the magnificent Mezquita (Great Mosque) which is now the Cathedral and explore the winding streets of the Jewish quarter and the enchanting terraced water gardens of the medieval palace. The journey finishes in Granada which was the last stronghold of the Moors and where, perched above the town is one of the most beautiful buildings of the Islamic world, is the Alhambra Palace, with its fairy-tale gardens and stunning architecture.

This journey is open to the the Alumni of SOAS Specialist Art Courses. Please note that Distant Horizons has sole responsibility for the operation of this tour. The participating University has no direct control over the operation of any tours. 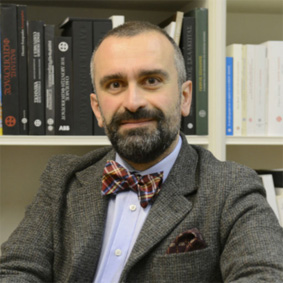 Dr George Manginis who is the Academic Director of the Benaki Museum in Athens. Since 2001 he has been teaching Theory of Art History and Archaeology, History of Islamic and Byzantine Art and Architecture and History of Chinese Ceramics for SOAS, the Courtauld Institute of Art, the Victoria & Albert Museum, the British Museum, the Benaki Museum and the Museum of Islamic Art in Qatar